MRI procedures for patients with traditional implanted pacemaker implants are not recommended because these patients could face serious complications, such as interference with pacemaker operation, damage to system components, lead or pacemaker dislodgement or changes in pacing.

Approximately 1.5 million Americans have pacemakers, devices designed to keep the heart beating at a steady rhythm. Most pacemaker patients are 65 and older and at an age when illnesses and injuries requiring MRI develop.

The number of patients with pacemakers is growing at the same time the use of MRI is increasing. About 40 million MRI scans are performed annually in the United States. Beaumont performs approximately 65,000 MRI scans each year. MRI scanning is often preferred by physicians because it provides a level of detail and clarity not offered by other soft tissue (bodily organs, muscles, tendons, nerves, tumors, etc.)
imaging methods.

It has been estimated that there is a 50 to 75 percent probability that cardiac device patients will require an MRI over the lifetime of their devices. Furthermore, more than 200,000 patients annually in the U.S. have to forego an MRI scan because they have a pacemaker, an important patient need that this new pacemaker may help address. 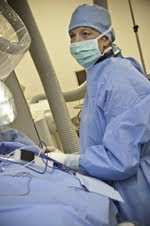 "Medical imaging and electronic implantable devices such as pacemakers are important technological advances," says Dr. Kutinsky. "Beaumont is always looking for ways to provide safer access to MRI for patients with pacemakers who also have conditions that may require MRI testing."

Developed by Medtronic after more than a decade of research, the Revo MRI SureScan pacing system has been designed to address safety concerns around MRI procedures for patients who have implanted pacemakers. The Revo MRI pacing system, when programmed into the device's SureScan mode prior to an MRI scan, is designed to be used safely with MRI scans. The pacing system includes hardware modifications to the device and leads that are designed to reduce or eliminate several hazards produced by the
MRI environment. 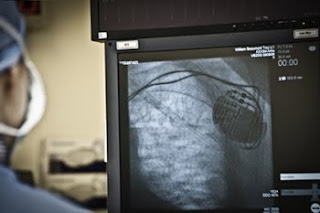 Dr. Kutinsky looks at the monitor after placing SE Michigan's first MRI-Safe pacemaker
Posted by Michigan Heart Group at 6:00 AM