Early after the introduction of cardiac troponin T (cTnT), it was recognized that levels were frequently elevated in asymptomatic patients on dialysis.2 This was initially attributed to nonspecific antibody interactions, but even with a second generation revision of the assay that resulted in nearly 100% cardiac specificity, elevated levels were common in this population.3,4 In contrast, cardiac troponin I (cTnI) was infrequently detectable in these same patients.3,4 Subsequently, a substantial amount of literature has been generated over the past 11-12 years to investigate the significance of these findings.

Both troponin assays remain useful diagnostic and prognostic markers for acute coronary syndromes (ACS) in patients with chronic kidney disease, including those on dialysis. However, caveats apply in their interpretation compared to those without impaired renal function.

According to the National Academy of Clinical Biochemistry Laboratory Medicine Practice Guidelines of 2007, class I evidence supports measurement of cTn in renal failure patients with signs and symptoms of ACS for evaluation of MI.5 In those ESRD patients who have baseline elevation of cTn and present with signs and symptoms of ACS, a dynamic change defined as an increase in troponin value of at least 20% (when the baseline cTn level starts elevated) should be considered diagnostic of an acute MI.5 Utilizing serial change in troponin levels is incorporated in the revised universal definition of MI, recognizing the importance of separating chronic elevations in conditions such as renal disease from ACS.6

In addition to having a diagnostic role in renal failure patients with suspected ACS, cTnT maintains a prognostic role in ACS patients with renal failure. Aviles et al. identified a large cohort of patients with a spectrum of renal disease and suspected ACS, enrolled in the Global Use of Strategies to Open Occluded Arteries IV (GUSTO IV) trial.7 An elevated cTnT at presentation independently predicted short-term (30-day) risk of death and MI across the spectrum of renal function, with the noted limitation of inclusion of only a small number of patients on dialysis.

For patients on dialysis without suspected ACS or other cardiac symptoms, cTn levels, particularly cTnT, remain independently prognostic of all-cause and cardiovascular mortality. A meta-analysis by Khan et al., including 28 studies, best summarizes these findings (Figure 1).8 Evidence for the association of cTnI level and all-cause mortality is more mixed, although overall, the findings from the meta-analysis showed cTnI level to predict all-cause, but not cardiac-specific death in dialysis patients (Figure 2).8 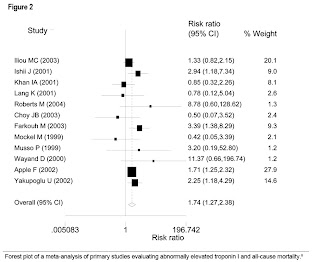 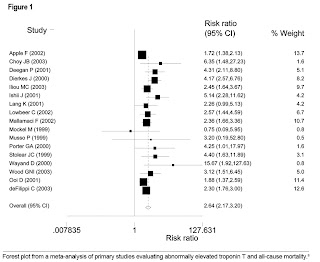 A variety of different assays and diagnostic cut-offs may have accounted for the inconsistent association of cTnI level and mortality in dialysis patients. Several biologic explanations have been offered for the difference in cTnT and cTnI findings, including the presence of immuno-reactive fragments of the cTnI molecule in hemodialysis patients.9 However, the presence of cTnT fragments has been refuted by others.10 Most likely, disparities in assay sensitivity and standardization between cTnT and cTnI are the explanations for the observed differences.

Supporting this hypothesis was the finding in predialysis renal disease patients, without cardiac symptoms, using a newer generation sensitive cTnI assay. This study showed that the prevalence of elevated cTnI levels was similar to cTnT.11 Furthermore, elevation of either cTnT or cTnI with the sensitive assay was associated with a similar poor prognosis compared to those subjects without detectable levels.11 Preliminary data using new highly sensitive cTnT and cTnI assays show a similar proportion of values above the 99th percentile of a normal population in ambulatory renal disease patients not on dialysis. Furthermore, significant associations remain for both assays for the extent of coronary calcium and a history of coronary disease.12

In summary, additional studies will be needed to establish the prognostic value of cTnI in ESRD. Both tests remain critical to the diagnosis of ACS in these patients, and while a single value carries important prognostic information in the presence or absence of symptoms, change in levels by serial measures is required to diagnose MI.5,6

Potential Etiologies of Elevated Cardiac Troponins in Patients With End-Stage Renal Disease
The exact pathophysiologic mechanism for etiology of cTn elevation in asymptomatic patients with renal disease remains unknown. Several associations have been investigated to provide insight into the probable mechanisms of release from the myocardium. These include epicardial coronary artery disease with associated microinfarctions and left ventricular hypertrophy (LVH). In support of an epicardial coronary disease hypothesis is a strong association between increasing cTnT levels and a progressively higher prevalence of multi-vessel coronary disease in 67 asymptomatic ESRD patients volunteering for coronary angiography.13

Additionally, asymptomatic multi-vessel coronary artery stenosis is frequently present at the start of dialysis in patients with detectable cTnT,14 although this association has not been a consistent finding.15 This negative finding may be a result of an overall younger and healthier population selected for pretransplant evaluation versus an all-comers study, but also points to alternative mechanisms for cTn elevation in ESRD.

To follow-up this hypothesis, cardiac magnetic resonance imaging with delayed enhancement gadolinium has been utilized to identify detection of small foci of myocardial necrosis, which can represent epicardial coronary plaque embolization. In this small study of 26 ESRD subjects, one-half of whom had an elevated cTnT level, no significant association was found between cTnT level and presence of delayed enhancement gadolinium.16 The study was limited by the small number of subjects, but with the subsequent recognition of the risk of nephrogenic systemic fibrosis in renal patients exposed to gadolinium contrast, additional studies are unlikely to be performed.

Last, several studies have evaluated the association of LVH and troponin levels. LVH may result in subendocardial ischemia/injury or may be the result of a cardiomyopathic process, both of which could be a source of cardiac injury unrelated to coronary disease. LVH has been associated with elevated troponin in asymptomatic hemodialysis patients.4 Similarly, elevated LV mass index was associated with elevated cTnT levels and was the second strongest predictor of troponin elevation after age.17 However, as with coronary disease, the association of LVH and elevated cTnT is not consistent.13,16

Alternative explanations for elevated cTn levels in the absence of obvious imaging evidence of cardiac pathology may also include uremia-associated cardiac fibrosis. Patients with ESRD and fibrosis ≥30% on cardiac biopsy have a known poor prognosis.18 Fibrosis may represent the link between elevated troponin levels and the poor cardiac prognosis in patients with ESRD that is unrelated to MI. Advanced imaging techniques may eventually be able to test this association.

In conclusion, cardiovascular disease is a major cause of death in patients with ESRD. Elevated levels of cTnT and cTnI are associated with a poor prognosis in both those with and without a diagnosis of ACS. As the sensitivity of both assays improves, there is likely to be little that differentiates them in this patient population.

Posted by Steven Almany M.D.
Posted by Michigan Heart Group at 6:00 AM