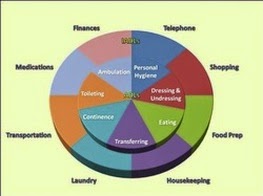 ROCHESTER, MN—Patients with heart failure who were seen at a major medical center commonly struggled with nine activities of daily living (ADL), which often worsened over time and were a powerful predictor of all-cause death and hospitalization during a mean follow-up of 3.2 years, according to a new study [1].

Even patients with no/minimal difficulties with ADL only survived a mean of 5.6 years. However, those with moderate or severe difficulties survived a mean of only 3.0 and 1.5 years, respectively.  Asking HF patients about ADL “is a relatively easy thing to assess during a routine clinical visit…[and it] certainly provides a framework to identify patients…who are at higher risk for adverse outcomes,” lead author Dr. Shannon M. Dunlay (May Clinic. Rochester, MN) told heartwire.

The study is unique in that the researchers assessed ADL, a measure used in oncology and gerontology for many years, but rarely used in cardiology,”  Dr. Kathleen Dracup (University of California, San Francisco School of Nursing), who was not involved in the study, told heartwire.

It shows that ADL “provides an important window into the daily life of the patient…and may provide a powerful tool to identify patients who might consider palliative care in the future,” she said.  Thus, at minimum, clinicians need to ask about ADLs as part of the routine clinical visit…[which] has never been part of the standard cardiac assessment.”

Do ADL Difficulties Predict Early Death?
Little is known about how functional disability affects survival and hospitalization in patients with HF, Dunlay and colleagues write.

They studied 1128 patients with HF who were seen in the Mayo Clinic from September 2003 through January 2012 and followed until January 2013 and had completed a questionnaire asking them to reply “yes” or “no” to indicate if they had difficulties with nine ADLs.

Most patients (69%) were enrolled as outpatients, while the rest were enrolled when they were hospitalized for HF.  The patients had a mean age of 75 years, and 49% were women.  About 6 in 10 patients reported having difficulty with at least one of the nine ADL’s.

The researches ranked the ADL, from easiest to hardest, as follows:  Feeding oneself, using the toilet, dressing, taking medications, bathing, taking transportation, housekeeping, walking, and climbing stairs.  After a mean follow-up of 3.2 years, 54% of the patients had died.

Risk of Outcome With Moderate and Severe vs. No/Minimal Difficulty with ADL, HR (95%CI)*
*During a mean follow-up of 3.2 years; adjusted for age, sex, Charlson comorbidity index, and hospitalized vs. outpatient at enrollment ADL= activities of daily living

The 17.7% of survivors who reported more difficulty with ADL and patients with persistently severe or worsening difficulty were at increased risk for death (HR 2.10, 95% CI 1.71-2.58; P less than 0.001) and hospitalization (HR 1.51, 95% CI 1.31-17.74; P less than 0.001), Asking about ADLs can help identify which patients may need physical therapy to improve or retain their mobility, Dunlay noted.  More research is needed to identify “whether there are specific interventions, physical therapy, of types of care that can help patients who are having difficulties with ADL and potentially impact their outcomes and quality of life,” she said.

First, ADL in HF patients could be assessed by an online questionnaire during or prior to a clinic visit.  Second, more research is needed to better understand why certain ADL limitations are associated with earlier death and to design targeted therapies for high-risk patients.  Last, “this adds another prognostic tool that can be used by clinicians as we provide guidance into complex shared decision-making.” He said.

“Unfortunately, 50% of patients with HF will die within 5 years, [which] has not changed over the past decade despite advances in treatment,” Drakup noted.  This study—like other studies that used the 6-minute walk—shows that functional status is an important predictor of mortality, she said.

Moreover, “if high-risk and low-risk [HF patients] could be identified with any confidence, then clinicians could begin that all-important discussion about goals of treatment with high-risk patients,” she said.  “Clinicians may refer patients to hospice care earlier—currently in cardiology such referrals are infamously late (often in the last 3 days of life)—and shift the goals of treatment to comfort card vs. ‘cure’ for patients with a high risk of dying”

This work was supported by grants from the National Institutes of Health.  The authors, Lewis and Drakup have no relevant financial relationships.

POSTED by:  Steven Ajluni, MD
Posted by Michigan Heart Group at 6:00 AM